About ten years ago when I visited Christine while she was still a Peace Corps volunteer in Benin, she asked me what I wanted to do around the country, before quickly muttering something disparaging along the lines of “anything but Ganvie . . . it’s waaaay too touristy.” As one of the few world citizens without a deep knowledge of Beninese history and culture at the time, I had no idea what ‘a ganvie’ was, and generally accepted the stipulation that it was not on the table. However, after having learned later on of its fame and frequent reference as “the Venice of Africa,” I secretly harbored a desire to visit the floating village on Lake Nokoue. A village where the houses have been built on stilts in the middle of the water for centuries as a means to avoid enemies, less than an hour from Cotonou – who doesn’t want to see that? Aside from dismissive Peace Corps volunteers who actively disdain anyone who commits to Benin for less than two years at a time and contemptuously frown upon all others who pass in their midst, of course (note: I am as guilty of this as anyone as well, thus am qualified to write it). Nonetheless, given Christine’s initial reaction, I kept such desire hidden, lest I be lumped in with all the other ephemeral visitors.

For years I never told Christine about my desire to visit the village, fearful of her response – that is until she married me. Once that deed was done and she could use my childish aspirations as an excuse to forever depart no more, I broke the news. As luck would have it, a few years later she accepted a short-term position in Benin and I was to accompany her – this time there would be ‘a Ganvie!’

No motos to get to this village

A few weeks in we got our chance during a belatedly announced national holiday in the middle of the week. With no other plans, Christine begrudgingly asked what I wanted to do, knowing all too well that response was “we’re going to Ganvie!” But given her own graduation from the Peace Corps ten years prior, and an abundance of world travels since then where we were the non-committal tourists who came, took photos, and absconded, Christine relented and we were allowed to play tourist.

Us happy tourists along for the ride!

In fact, it could be the day we went there, or the fact that we just don’t care about anything anymore, but Ganvie was not as touristy as expected. Maybe this was also because this was all based on the ridiculous notion that anything in Benin could be “too” touristy, which thus meant other tourists would actually have to be present in this tiny country most outside West Africa do not believe even exists (I am still personally skeptical on that point myself).

Regardless, getting there is a breeze, and costs a grand total of $1 on public transport. A two-hour boat ride with the official association runs a bit more (at $10/person), but given that our boat did not appear to be teetering on the edge of destruction as most others plying the lake, it appeared to be good value. We opted for the optional guide, as we were full fledged tourists now, and went off. The two main pit stops the boat makes are designed to sell you items, but if you can ignore the desperate pleas for patronage (which we instantly did at each stop), the rest of the ride was through an active floating village. In fact, we only saw one other boat with tourists the whole time, though given the aforementioned low threshold of Beninese tourism, I could see how that could be classified as “too touristy.”

At any rate, Ganvie is an entire village built on stilts, dating back to the 1700s when the king of the Tofinu took his people into the water to avoid constant raids from enemies. The legend has it he transformed into some sort of animal, and then a few other mystical-type things happened, and then there was another round of such otherworldly developments, and then you had Ganvie. Or something like that as our tour guide explained, and I clearly closely listened. 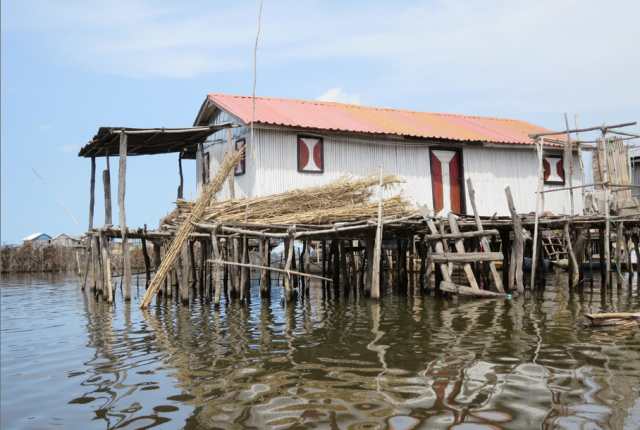 Ganvie as I always hoped and dreamed

The village itself it pretty interesting to see though, and not quite as “frozen in time” as one might expect. In fact, it has all the normal facets of a typical village, every building just so happens to be surrounded by water thus the roads are always flooded, even during the dry season. There were solar panels, a health center, a market, a mosque, and porches attached to many of the houses. We cruised down the two main “roads” which intersect at the local market in which the stalls are boat based. Unfortunately it was not market day, but other daily activities around the village we witnessed seemed fairly routine, just with a lot more fishing nets and boats present.

In a way it actually might be a super touristy village, in that people are used to foreigners idling by in their boats, and thus the constant screams of “yovo, cadeau!,” (white person, present!) are somewhat muted (though really only somewhat). All in all, it’s a pretty interesting place to visit, though the comparisons to the grandeur of Venice might be just a bit of a stretch. For a unique experience just outside Cotonou though, and a chance to spend a half day on the water, well then it’s well worth pretending to be a tourist for that! 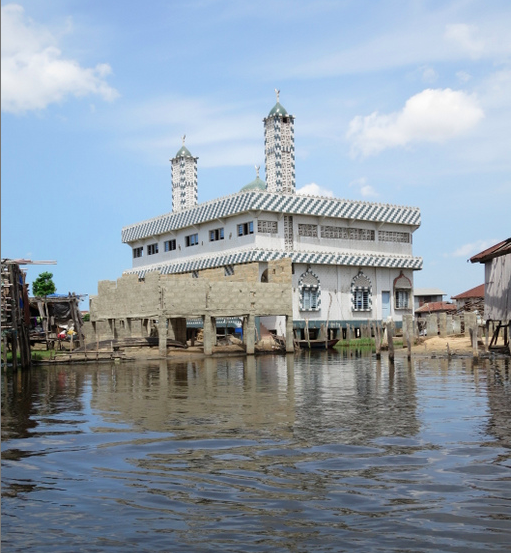 Even the mosque is on stilts!