The day before I turned 27, I found myself in Lahore, Pakistan.  I was staying with my grandmother, along with an aunt from America who also happened to be visiting at the time.  I had been to Pakistan many times before, but this trip was different; it was the first time I truly experienced the country.  I came on my own, without my parents, and I traveled outside our usual, family oriented destinations.  One could say I caught fleeting glimpses of ‘real’ Pakistan on this trip.  Or one could say I am just full of rhino sh*t, both adequately describe the situation.

Anyways on this day I was walking around the old city in Lahore, and I decided to try my best to blend it.  I had already been growing my beard for about a month by now, so it was decently long and dirty.  To complement this, I put on an average looking pair of shalwar kameez I had bought in the market for $4.  My touristy valuables (a lonely planet book and my camera) were placed in a sabzi tela, or a small white sac designed to hold vegetables, in an attempt to conceal them and my true identity.  Despite these efforts, I maintained my obligatory Redskins hat and a pair of overly large, ridiculous sunglasses that I had also just recently purchased.   To complete my appearance, I was rocking a nondescript pair of cheap sandals that actually proved to be rather comfortable.  I thought I looked pretty local, and in the rickshaw on the way out the driver did as well, that is until I opened my mouth and my halting, broken Urdu spoken in a Austrian accent gave me away (I have no idea how I developed an Austrian Urdu accent, I just did).  I quickly learned that if I just kept quiet no one would ever suspect me of being an outsider (as all Pakistanis by default wear Redskins baseball caps – it’s a glorious country).

After spending a good few hours randomly ambling through much of the old city and seeing the major sites, I came down to Mall Road, a major thoroughfare.  I saw a sign for the zoo and decide to stop by and check it out.  I toured it briefly, took a picture of a diseased rhino eating cotton candy, and exited back onto Mall Road.  It was the mid afternoon by now and I had had enough of walking, I was ready to return home.  At any rate my grandmother would be worried sick, she made my aunt call twice already during the day and I didn’t want to keep her much longer.

I hailed one rickshaw and explained where I wanted to go (after the first one I stopped had quoted me a ridiculous price).  This driver also started high, but went down to 70 rupees.  Given my extensive knowledge of the ins and outs of the rickshaw business climate in the summer of 2009, I was confident that 50 rupees would be a more acceptable price, a difference of 25 cents.  He refused to budge.  I had discovered from some of my travels that the best and least demanding bargaining tactic was simply to walk away.  That way if you were offering a fair price the driver would take you up on it as you were leaving to ensure some business.  Otherwise you were low-balling him too much and would offer a bit more to the next guy.  It was a simple application of the supply and demand graphs I had tattooed all over myself one wild night during my rebellious undergrad years – my econ major actually held an occasional practical use.   Often as soon as you begin to feign leaving or show disinterest, one becomes more desperate and accepts your price.  At least that’s how it worked much of the time in West Africa.  So I did that, but he didn’t seem to care and drove off.  I still thought 50 rupees was a good price, but decided for the sake of getting home I would pony up the extra quarter and take the next driver at 70.

There were not too many rickshaws forthcoming on this section of Mall Road, but thanks to my trusty lonely planet guidebook map I saw that there was a major intersection a bit up the road, which was the most logical route home anyways.  So I decided to make my way there, and if any rickshaws passed on the way I’d hail them down.  I jaywalked across the street quickly to get to the side I need to be on, and continued walking.  As I was walking I moved slowly, and kept peering behind me to see if any rickshaws were a coming.  I came to a small intersection to cross and saw some policemen up ahead.  Ignoring them I crossed the road, still looking back intermittently for approaching, vacant rickshaws.  The cops drove off down the road and I finished crossing the intersection.  I was apparently near some special building of sorts as this area was largely devoid of street vendors or pedestrians and the compound walls here were awfully high.  I knew there were some government buildings on Mall road, I had passed the High court and local assembly earlier, the scenes of recent protests, but thought nothing of it.  I had a semi-long distance to cover before I came to the major intersection and it didn’t seem like many rickshaws were plying this route, so I would have to go a bit quicker to get home soon.

Suddenly that police car, which was a five seater camry type with 3 cops in it, reversed in the middle of the road, slammed on the gas, and then came to a sudden stop right next to me.  I was a little startled by the change in movement.  The cops started rapidly firing question about where I was going in Urdu, a language that I should be fluent in from birth, but rather instead am quite conversationally limited.  I told them in broken Urdu I was trying to get to Gulberg III, the area where my grandmother lived.  They motioned for me to get in the car.  I briefly thought they saw that I was confused and a bit lost, and were offering me a ride home.  I quickly came to my senses and realized that could be in no way the case.  After an initial movement forward, I did not budge.  They slammed the car into park and all three cops jumped out.  Matters were intensifying rather quickly.

One cop began to frisk me, another had grabbed my tela, found my camera and demanded I turn it on for his viewing pleasure.  He proceeded to ask me questions about every picture, most of which, as I had been touring around Pakistan and taking photos of masjids (mosques) since there was much else to photographically capture in the country, went along the lines of “where is this masjid? Why do you have a picture of this masjid??”  Unfortunately Pakistan in the summer of 2009 was involved in a major war on terror of sorts, and recently masjids throughout the country had become particularly appealing targets for terrorist elements, thus explaining his suspicious demands about each and every of the 50 or so masjids I had digitally captured.

This was going on while the third cop was inspecting the ID card I had quickly thrown at him.  They were all barking questions out at the same time in Urdu,and I was going back and forth and back again in a vain attempt to keep up.  My Urdu as I mentioned is rather poor, trying to speak it rapidly in a high pressure situation surprisingly does not improve it much.   I  realized by this point that these fine young coppers had mistaken me for a terrorist or suspicious persons of a sort, a genuine mistake since I had so overwhelmingly succeeded in my attempts to blend in.  This would all be over when they understood the nature of my ID.  I had a POC (Pakistani origin card), which basically meant that I was a foreigner but of Pakistani bloodlines.  That was my trump card, and I produced it instantly when this madness began.  I figured as soon as they understood I was a foreigner, let alone an American, they’d let me go.  The gingerliness in which they had jumped out of the car and started accosting me had caught me off guard, but now I understood the situation and was ready to easily extricate myself the only the way I knew how, by explaining that I was not one of them.

The cop was inspecting my POC card and it was confusing him thoroughly, deservedly so.  It was issued by the Pakistani government, but apparently they never realized the point of having the card was to show to Pakistani authorities and not the foreigners themselves.  For that reason the entire card was basically in English.  As this cop obviously didn’t understand that language, it was essentially useless, and perhaps even look spurious, despite the fact that it clearly stated I was an (innocent) foreigner from America.  To that effect I produced my old never-expiring  Virginia Tech student ID and my Virginia state driving license, to further prove my point.  This only served to confuse them even more, and they began to wonder ‘why on earth does this guy have 3 different ID’s??’ 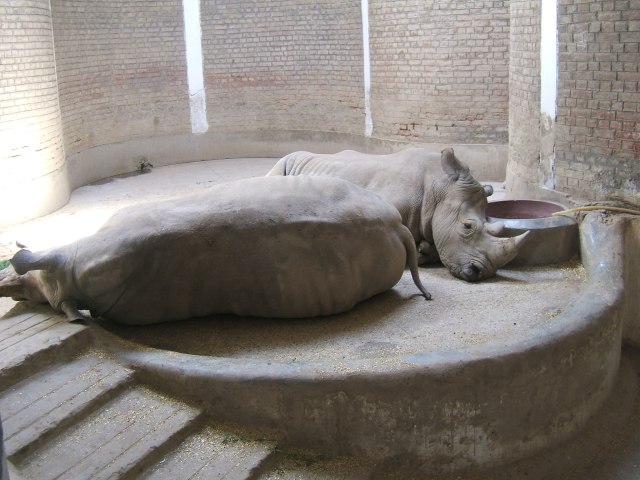 Should've ridden the rare Pakistan zoo rhino home, bet they would've done it for less than 50 rupees if I pretended I didn't want it.