It was an hour ride to the spot from which you hike about 30 minutes to get to the Blue Nile Falls.  During that ride we made some small chit-chat with our fellow passengers, while I wondered whether this felt ‘right’ or not.  Once we got there, the driver dropped us off, and we were instructed to walk down a bridge, up a hill, through a village, passed a yellow Yeti eating a popsicle, and then we would see the falls.  I began wondering at which part might be best – I had known there would be some walking involved but hadn’t really started to think about where exactly I might want to fake an injury and get down on one knee.  However I did not have much time to think, for as soon as Christine and I, plus the three Israeli girls, walked through the village, a cadre of about 10 to 15 small children surrounded us, more than half of them insistent that we contribute to the local small goods economy.

I wanted to distance myself from this crowd, while somehow also breaking off Christine.  The Israeli girls led the way and interacted with many of the kids, drawing most of their attention.  I lagged behind and Christine was in the middle.  It was a decent situation, and one I was later grateful for, because if the Israeli girls had not been there, then the entire undivided focus of all these tiny salespeople would’ve been solely on Christine and I, and who knows what would’ve happened (for the record, Christine is not the most ‘kid-friendly’ individual).

So I was walking slowly up the hill, thinking everything could still work.  However there was one small, eight year old, female problem.  One of the girls had decided to attach herself to me, and that I was definitely going to buy her recorder.  Now while I was pretty much an all world ‘hot cross buns’ recorder player in my prime, I figured that this might not impress the ladies (re: Christine) now as much as it had in third grade.   I was probably not going to buy this girl’s recorder and I tried to communicate that message clearly, but she was persistent.  It was actually a good marketing strategy on her part; all the other kids were trying to vie for the attention of three individuals, while she was one-on-one with me.  For some reason no kid followed Christine, I suppose she looks ‘not-kid-friendly’ on the outside as well.

So the circumstances weren’t great – the morning hadn’t been awesome, we had a lot of company on this trip, I specifically had some very persistent company, and on top of that it started to rain.  It was not a ton of rain, but enough to make you want to pick up the pace a bit and get the falls over with.  Unfortunately I did not have that luxury.  I was walking as slowly as possible while not making it look awkward, hoping that the Israeli girls would charge ahead with the crowd, and not just wait for me to catch up.  Christine was in the middle, trying to keep pace, but confused as to why I was going so slowly.  We came up to the falls, which are actually very, very brown, and everyone stopped to take pictures, meaning I would have to start being slow to avoid the crowd all over again.  The falls, for the record, were actually pretty decent – many had told us a recent dam and the beginning of the rainy season meant that there would barely be any water trickling out, but luckily for us it had supposedly rained the previous day (the first truly positive sign). 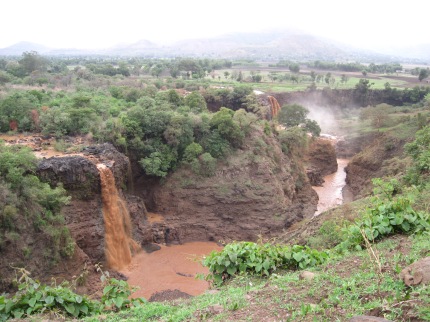