Fast forward to two weeks later. I had grown more confident in my surroundings after the demise of the rats, and often even left my mosquito net to go to the bathroom in the middle of the night now. It had been about six weeks in village, and I was starting to settle in. This particular day I had just come back from buying some bread along the main strip, and returned to make a sandwich. Another great prize from my care package was a jar of real American peanut butter, along with a jar of marshmallow fluff.  I was going to enjoy myself and make a fluffer nutter this fine afternoon, in addition to drinking some ice tea from a mix I had bought in my regional capital – middle class Sideradougou life was good.

I went into my kitchen to begin preparing, and noticed a really foul smell. It had been there for sometime actually, but smells come and go in these parts. I hadn’t paid too much attention, assuming it would go away eventually. It was definitely worse today though, but no matter – I had a mission and wasn’t going to let something like a putrid smell distract me.

I went over to the corner of my kitchen were my utensil jar was, and where the smell seemed strongest, and got out a knife to cut open my bread and spread the peanut butter, followed by the fluff (there are competing schools of thought on the right way to do it, but I’m a peanut butter first kind of guy). I grabbed another utensil to prepare my ice tea. As is typical, after stirring I left the spoon in the cup. I took both my sandwich and drink over to a table in my living room so to speak (I actually had a very large house by Burkina Peace Corps standards – as I had replaced a married couple, the village had ensured they received a big house since there was two of them). I began happily eating my sandwich and drinking my ice tea. Something was odd though – before the smell had been confined just to that corner of the kitchen. Now it seemed to have followed me (could it be I? yes probably, but it seemed there was also something in addition to that). My food in particular had a bit of an odor around it, and it was strong whenever I drank my ice tea. No matter, I was eating a fluffer nutter and drinking ice tea – life was good for the moment and I didn’t want a wretched stench to bring me down, I could deal with that later.

So I finished up my meal and decided maybe now was time to figure this all out. I brought my dishes back to my kitchen and started sniffing around, trying to figure out where the smell was coming from. It was definitely the back corner, where on a small table I had my water filter and utensil jar. As I sniffed around I noticed it was actually strongest right by the utensil jar. That’s odd I thought, I wash my utensils all the time, I wonder why they would be stinking so bad?

I sniffed around a bit more just to make sure it was the utensil jar and not something else, but it was definitely strongest there. It literally smelled like poo, something must’ve been rotting there for some reason. But what, metal spoons don’t typically rot do they?  I peered into my utensil jar, but as the married couple prior had left me with more knives, spoons, and forks than I could ever want, it was too crowded to see anything inside but blackness. I poked around a bit, but still nothing. I figured the smell must be something else, but thought I would do my due diligence and take out all the utensils for a better look.

As I was taking them out by the handful I saw something and froze. It could not be, no way! I took out some more and kept looking – then I almost puked. There were no more utensils remaining in my utensil jar, but there was a brown blob, similar to the one I had showered with two weeks ago . . . a dead, rotting rat was sitting in my utensil jar! 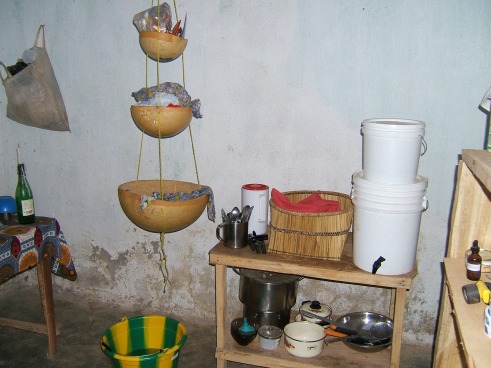 If you were a dying rodent, where would you hide? (note: utensil jar on the shelf is already taken)