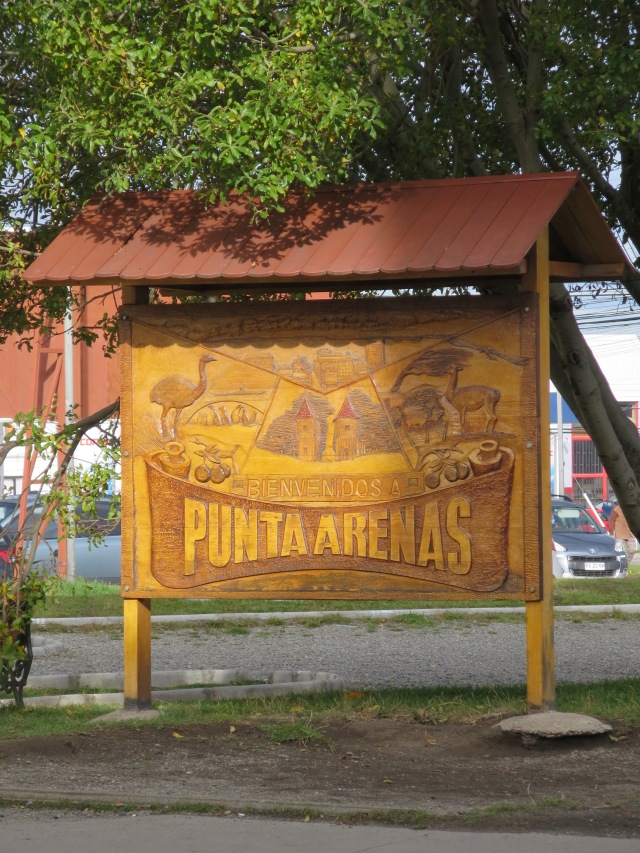 In the Antarctica region!

On 10 April 2015, we flew into Punta Arenas with the aim of heading straight Puerto Natales (where we would start our Patagonia hike). Despite previous attempts, we were unable to book a bus directly from the airport to Puerto Natales, and thus were forced to take a bus into Punta Arenas town and try our luck at one of four bus stations there that service the frequently touristed route. To our dismay, we got one of the bus stations at 1:30 hoping to board the next one, at 2:30. Unfortunately luck was not on our side and they, in addition to all other stations in town, were sold out until 18:30 – apparently the ‘low’ season for Patagonia still equates into a decent amount of traffic. So what to do when stuck in Punta Arenas for the afternoon, a situation that many of us face at some point in our lives (some even daily)? Well, take our soon-to-be patented 150-minute tour of the city of course!

Punta Arenas is really south, like the way deep south. In fact in Chile, aside from some smaller population centers on the island of Tierra del Fuego its the most southern city of decent size, and the capital of the Magellenes and Antarctica region (yes Antarctica, it’s that far south). Looking at how far south it was on a map was enough for me to be astonished walking around – not so much for Christine. Thus we picked up a handy little map of the city, and set out on an improvisational walking tour, taking in all Punta Arenas had to offer.

The city itself lies right on the water, stretching up hill the further north to go, and despite its walkability it actually bursts at the seams at either end (who lives here and why? what do they do all day and during the winter? Do they ever hunt for seals and accidently stab themselves in the toe? All valid questions our tour unfortunately did not answer). In addition, on the map were many green spaces which I interpreted as parks – we quickly found them rather to be random expanses of barren marshland. Still adds a nice touch.

Our bus station was fortunately centrally located, so we started by heading down to the main square, or the Plaza Munoz Gamero. There was a tourist office there that was conveniently closed, while the monument on the middle, on Magellenes street was, you guessed, none other than Magellan himself, commemorating his trip around Tierra del Fuego in the 1500s. Otherwise of note, there was a cathedral and old Spanish-colonial type building hugging the wide plaza lanes, given it a distinctive historic Latin American town feel, despite its relatively recent roots (mid 1800s) and extreme distance from anything decent. 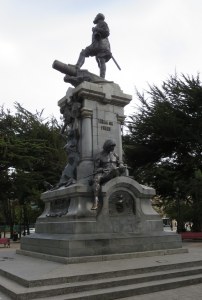 When in doubt, head north. We decided to do as much, where the city rises in elevation a bit. Walking up some steps to another monument of sorts for the Selknam people, an apparently extinct ethnic group that dressed up in really scary costumes a la something out of True Detective (Chile is really proud of these folks despite their current non-existence with paintings of them everywhere). Regardless of the impetus for this monument, it provided great views of Punta Arenas down to the coast.

From there we continued to walk north a bit through largely residential areas until we could walk no longer – the start of what we had assumed was a park began. In reality it was a large concrete wall we could not see over the top of. Continuing down it, eventually someone had broken it at one point low enough to serve as a vantage point, where we realized it was not a part at all but more of that barren marshland in the middle of the city. Though there was a large lagoon, that our map told us serves as an ice skating rink (luckily not right now though).

Heading east across the upper part of town, we continued through a weird park of sorts and past a university. Not too much happens here at 15:00 on a Friday afternoon, but then again people mostly stay inside and wonder why they live here (it was probably high 40s, not bad until the wind hits, but its hits often).

Eventually we headed back to the lower parts of the town and came across a series of structures decided to Croatia of all places. The Punta Arenas-Croatian connection is apparently strong, a point to which these monuments in prime real estate in the middle of town attested towards. Some say up to 50% of Punta Arenas-ans derive from Croatians who largely came over in the early 19th century (in fact, Chile actually serves as the largest center of Croatians outside of the Balkans itself, with most settling in the northern and southern extremes of the country). 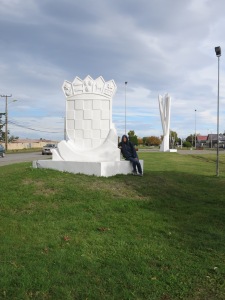 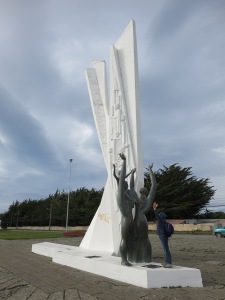 Another monument to the Croatians

Continuing on this path, we hit up the local cemetery – perhaps an odd place to visit for the non-devil worshippers among us, but the cemetery in Punta Arenas is apparently renown for its intricate and diverse grave sites. Ranging from tall house-sized structures hosting entire families to more simple apartment-style final resting spots, the cemetery hosts deceased from a range of ethnic family names, a testament to the diverse origins of Punta Arenas’ inhabitants. A great number of gravestones from the 1920s and 30s were in English, while of course we found a row of just Croatian names. The layout itself is well preserved, becoming an attraction, albeit a slightly odd one, in its own right. 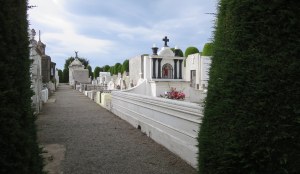 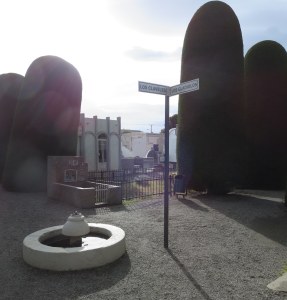 Cemetery so big it has its own street names

Continuing after the cemetery we came across the Maria Auxiliary church, a massive structure. It just so happened to be directly after a funeral, with the church bell ringing out and a procession heading towards the cemetery from once we had just come. 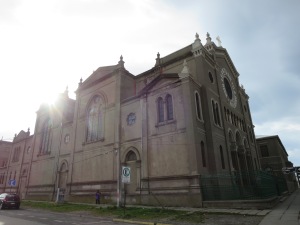 The church led us back to down town, so we made a beeline south for the coast, where we passed across a Croatian school on Croatia street (this is really getting weird). 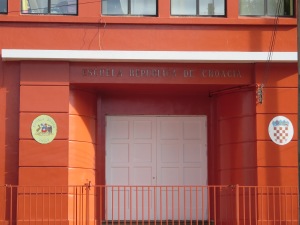 The coast itself is hugged by a highway, but has a little bit of a beach and even some prime basketball and skate parks. Another monument or two to Magellan is present, while the road continues to the port where we saw a cruise ship in the distance (not sure if they cruise inhabitants were thrilled with the exotically cold locations serviced by their ostensibly discount cruise ticket likely purchased on Craig’s List). 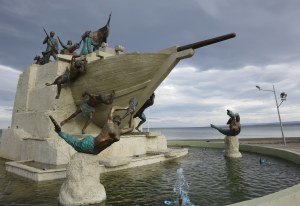 Heading back north away from the coast through the center of town leads to another monument or two, until you hit up the main square area once again, and the road with all the bus stations. But the tour doesn’t have to stop there, as no trip is complete without some local delicacies. The town itself comes alive at 5pm, almost instantaneously, transforming itself from a desolate and depressing Siberian output back into an animated Latin American city in mere minutes. Drummers came out, kiosks were set up, and the churros showed up.

Patagonia Churros to be exact, freshly made and filled with dulche de leche cream. Four for 1,200 Chilean pesos (50 cents each) from a locally renown lady. A fitting but messy way to end our makeshift tour of Punta Arenas and 150 minutes well spent (note: I spent the next 150 minutes washing dulche de leche cream off my body). So next time you get stranded for hours in Punta Arenas thinking there’s nothing to do in this remote outpost town, think again and take our 150-minute city walking tour (and yes I will be trademarking this in an attempt to charge royalties every time someone in Punta Arenas walks outside, anywhere)!