As part of our South American adventure, the Amazon was always expected to be one of the highlights. Though we were not visiting Brazil, we had heard from a friend that Ecuador was the best of the other countries, as the rivers that flow through the jungle are narrower, thus allowing for more animal sightings. While other travelers we met along the way regaled us with tales of their Amazon adventures in Peru and Bolivia, we kept the mantra and were fully committed to Ecuador. Amidst a range of options, we decided to stay at an Eco lodge in the Cuyabeno Reserve, in the northeast of the country. To get there you had to take a 2 hour flight from Quito to Lago Agrio, followed by a two hour bus ride to the river, and then a two hour boat ride to the lodge. It was out there. We arrived to our basic but comfortable lodge, after seeing various monkeys, birds and even a sloth along the way. 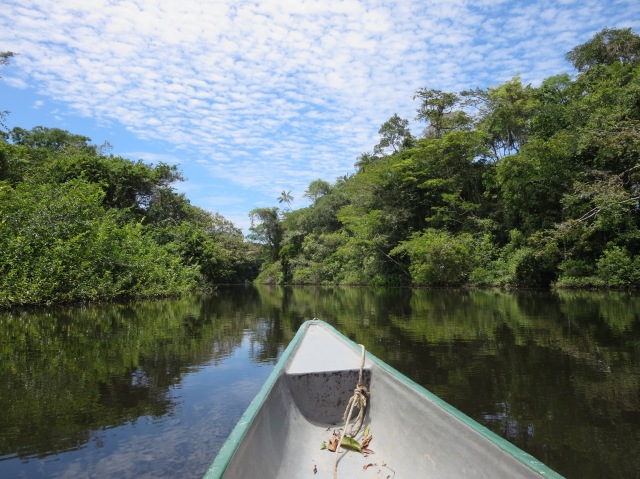 Cruising down the Rio Cuyabeno

Though the lodge was in the middle of the jungle and had only partial walls, in your mind there was a separation. The animals are out there and we are in here. This bubble was initially burst when we arrived back from our night tour on the river to see people staring at the entrance of the dining cabin. There seemed to be something of interest, so we headed over only to find a large tarantula in the entrance way. Not what you want to see before you head to your cabin at night for the first time. The guides tried to assure us that they only lived in the dining cabin and rarely went to the room. Not so reassuring. 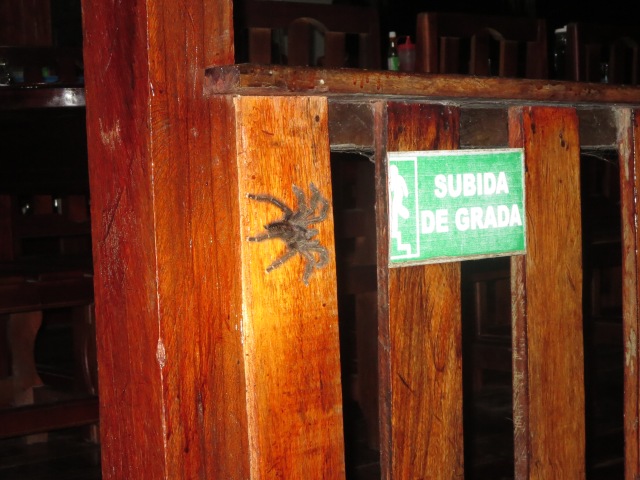 We went to bed our first night, checking all of the sheets and blankets first to make sure the coast was clear. We then sequestered ourselves inside of our mosquito net and were seemingly safe. In the middle of the night, however, Omar had to go to the bathroom. After using the bathroom (attached to our room) with his headlamp on, he went to wash his hands, only to find a frog sitting right in our sink. A bit of a shock when you are groggy in the middle of the night. He told me about it the next morning, but when we went in, the frog was nowhere to be found.

Later the second day, after a hike through the muddy forest, we were hanging up our clothes to dry around the cabin. Omar wanted to hang his hat, but there were limited hooks in the room. He saw a hook just outside our room where he went to hang his hat, only to realize that this hook was actually a frog looking out of a hole in the wood! 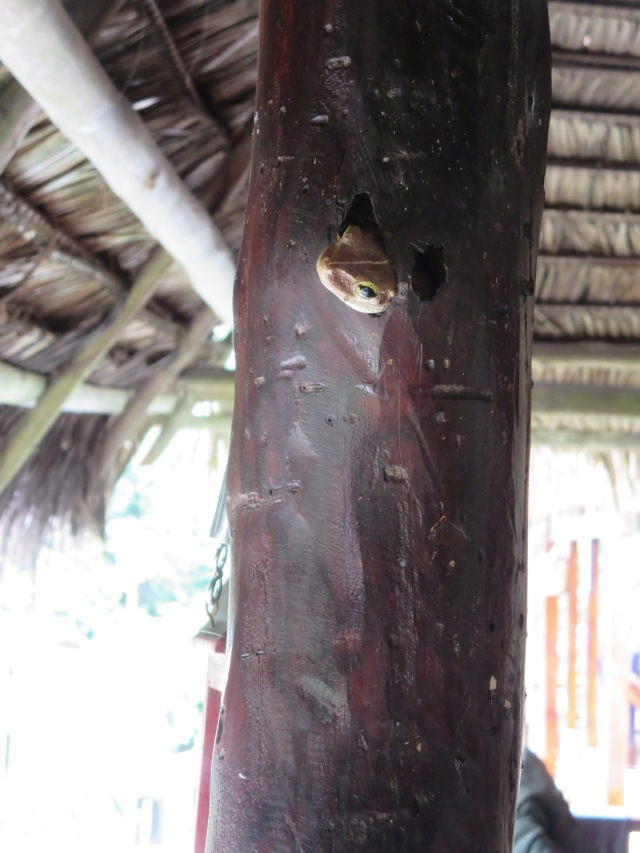 Not a hook at all

We later learned that our frog friend, which we quickly named Leopold, would spend his days in the hole. As it got darker, you would see him start to move further out of the hole and, inevitably while we were at dinner or out of the room, he would make his way to the bathroom. One night, we invited the others people on our tour to meet Leopold and he posed on the sink for them. 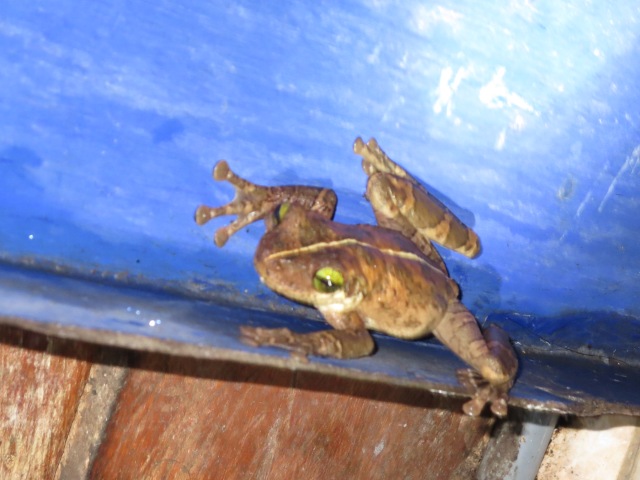 Leopold in the shower

Now expecting Leopold to be in sink, it made things much less scary when you found him there. The last night, however, he decided to switch it up and waited on the door, exactly where you put your hand to push it open. He got Omar again when he went to the bathroom. His final joke, which I am sure he will be laughing about for days after. 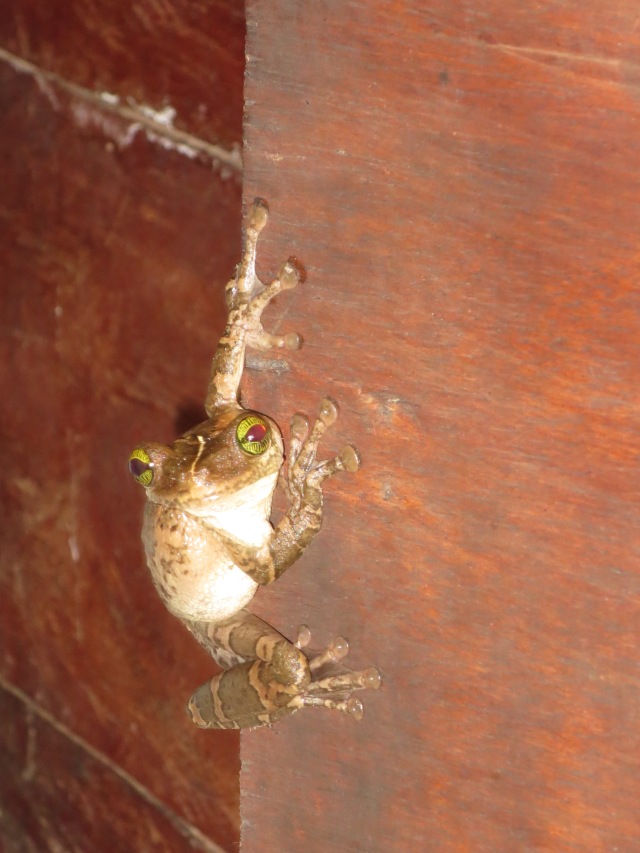 Waiting for the sink to be turned on

We saw a lot of interesting plant and animals during our trip and were glad we waited for Ecuador. We are also glad that Leopold was the only to enter our room, as far as we know. 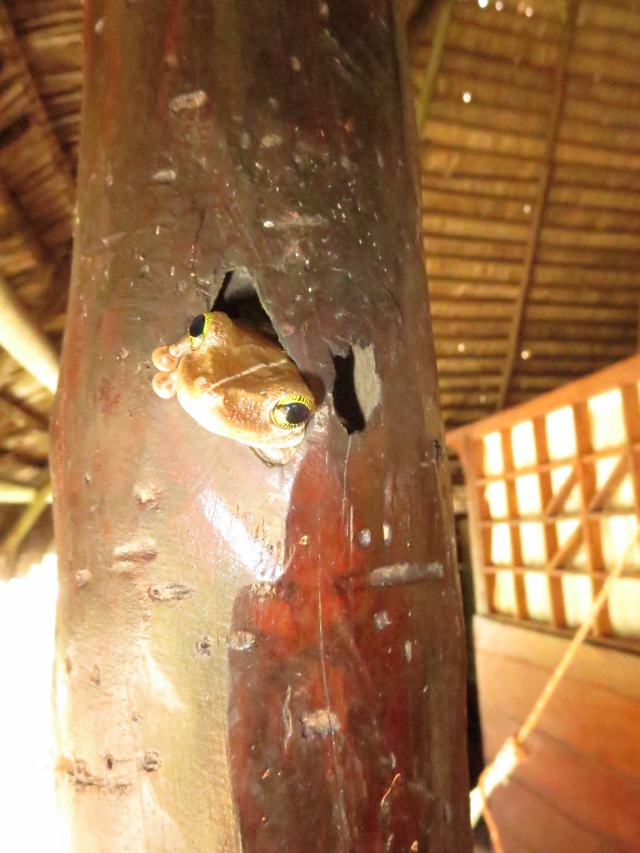