One thing I’ve noticed everywhere I’ve traveled, is that everyone eats food. It’s kind of crazy, but trust me it’s true. The Andean countries were no exception, as demonstrated below. Peru itself is an exception, in that its cuisine is rather exceptional, and thus deserves a separate upcoming post, fulfilling the Argentina role of the Andean nations.

Anticuchos or beef hearts. Served with a portion of potatoes, they taste much better than they sound in fact. I think most cows would agree with me. Accompanied with fideos de aji (spicy noodles).

Meat on a stick. It works in all countries (and makes for the perfect birthday meal!)

This is where papa rellenos were introduced as a near daily item in our travel diet. Basically fried mashed potatoes stuffed with various items, I’m surprised this hasn’t taken off in America (imagine cheese & turkey bacon papa rellenos?? Apples and brie? Or for a healthy yuppie option, with kale with more kale?)

Peach pit juice – for those who think the drinks in America just never had enough pits in them. 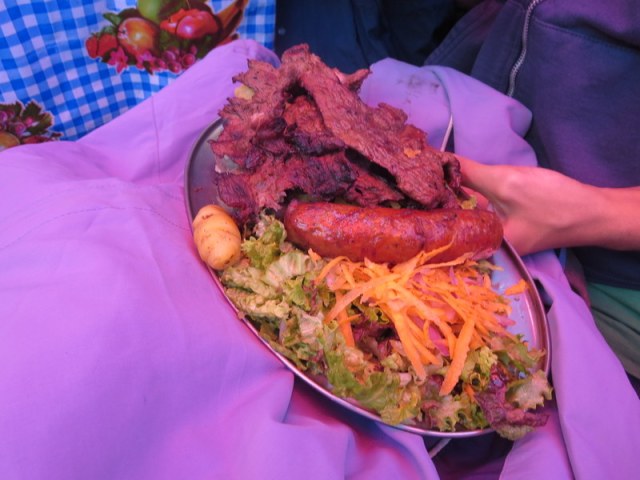 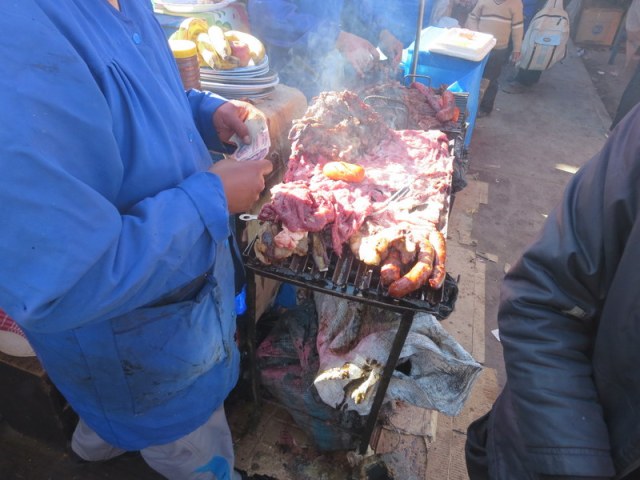 Normally eating up a llama would never cross my mind, but normally llamas do not cross my mind that often. This place served not only grilled to savory perfection llama steaks, but also llama chorizos. Part of a Sunday market eating tour, we were stuffed by the time we found this place at the end of the market, but the option of a whole plate full of variously prepared llama meats for $4 was too tantalizing to pass up (with no regrets – one of best meat dishes of the trip!).

Deserts are king – chocolate covered strawberries and ubiquitous slices of moist birthday cake abound. The cake in particular became an internal hit, to the point where I began shaking most days around 5pm without it.

The best afternoons were ones where I accomplished the Trifecta – the consumption of cake, jello, and sublime (a surprisingly delicious chocolate bar) in quick succession. I’d like to say those afternoons were rare, so I will (just know that I am lying). While the feeling of accomplishment immediately post-Trifecta was rewarding, how I felt 20 minutes afterwards is a different story . . . 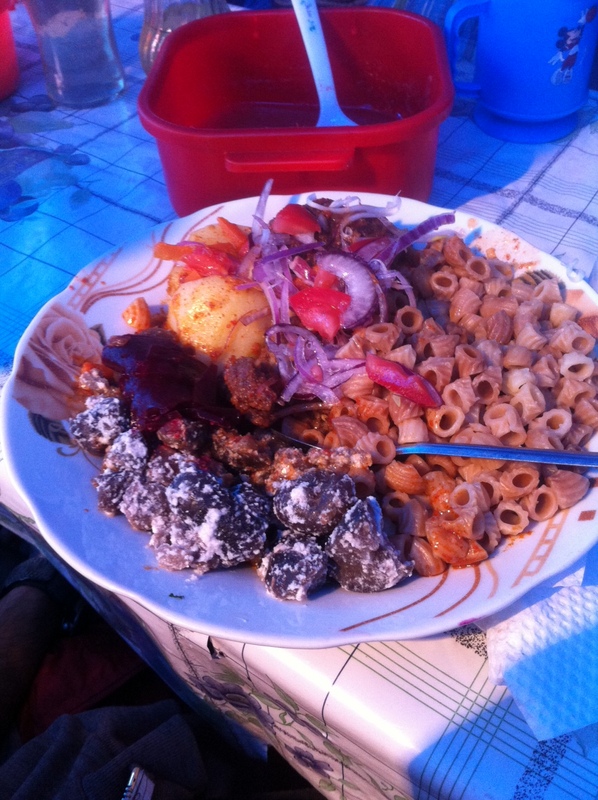 Albondigas plate, or meatballs with a bunch of side stuff, including tubers and purple corn. Typical dish, also seen with chorizo. 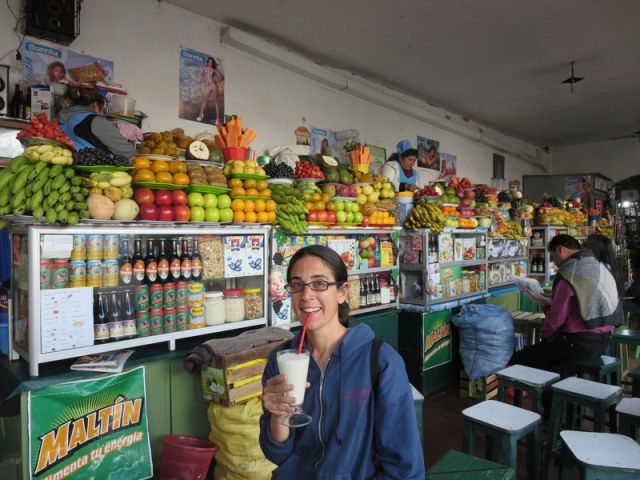 Juices, juices, and more juices. Of all kinds, with milk or water. Not pictured here, but I had a peanut with milk one that went over pretty well with myself.

Salteñas – a take on your typical empanada but with juice inside and a sweeter taste. They will explode hot liquid all over you if you are unaware of their contents, as we learned the hard way (thus going to a place with a plate & utensils for this one). Pretty decent, but prefer the less sweet ones. 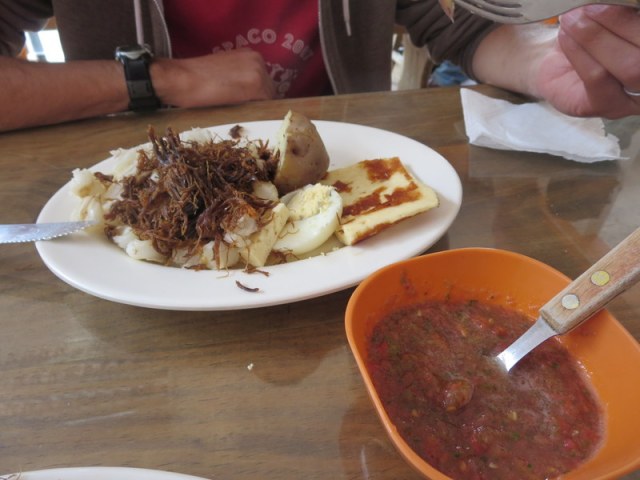 Charky is Bolivian beef jerky made from llama? Served with cheese here, it is delicious but incredibly salty, which is saying something coming from me. We were unable to finish this plate, which normally may be a decent thing as well-preserved as it may be. In this case it was not.

A fried banana filled with cheese! A snack fit for the gods but made by a human – how could it be so? I am not one to question, so I’ll stop and just order another.

Street meat is eat(en) meat. A combo platter for $4.

The reign of papas rellenos continue, with a heavy focus on rice on the inside. These ones even come with an ever-handy spork.

Shrimp ceviche, or more like shrimp soup. Sounds amazing, but we all know how I feel about soup (apparently me and Malfalda a like). Good attempt by Ecuador, but will take its southern neighbor’s version over it any day of the week (including the odd leap year Tuesday). 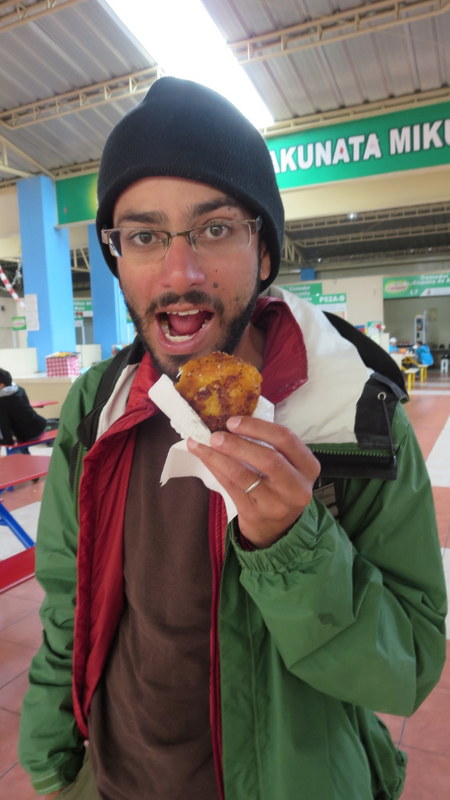 Cheese tortillas! Anything with cheese wins, every time.

I honestly don’t remember what this was. I was hoping you could tell me.

Completely artificial slushy, as I tried my best in Colombia to recreate the trifecta given less frequent jello sightings, inferior cake, and non-existent sublimes. Try as Colombia might, the deserts just don’t live up, but they do serve as a forceful way to detox back to a normal and healthy level of sugar. 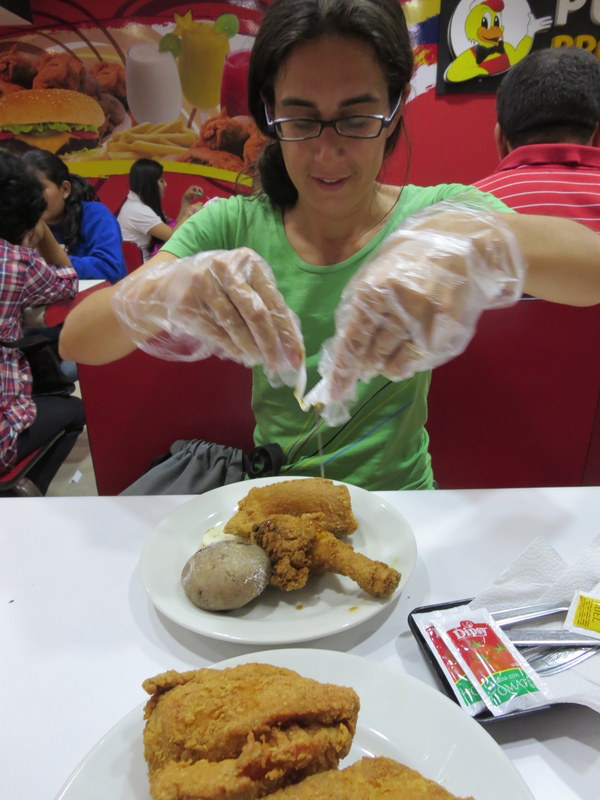 What Colombia lacks in the desert department, it does make up however in the fried chicken with artificial honey department. Likely just as insalubrious, the combo of fried chicken skin and chemically induced/factory produced honey is a winner in my book of food winners (2015 edition).

Caldo de pollo, or basically chicken soup. Aghast, Christine is eating a meal with another brown man (while I film)! Notice that is also our last food photo . . . interpret as you will.

One comment on “The Culinary Tour Continues – Andean Edition”