Cuba has been on a lot of minds lately, in large part due to the advancing winds of change emanating from its traditionally hostile northern neighbor. Speculation about the potential impact of normalized relations with the hitherto isolated island has spurred a surge in tourist visits, as many attempt to get on the ground prior to the lifting of the five and one-half decade old US economic embargo, and avoid a presumed future with sun-stained and wrinkled Floridians on every block, the Big Mac as Cuba’s national dish, and Starbucks coffee coming out of all public faucets (a mindset that yours truly has been as guilty as anyone of harboring). This ‘normalization’ effect has been so significant that during a recent visit at the turn of 2015, tourist industry operators countlessly explained that this was the largest number of visitors they had ever experienced, straining the already limited service capacity. As hordes of vacationeers grasp at a presumed last chance to visit a pristine land immune to the pernicious evils of American capitalist greed and Hollywood culture, it might be a good time to inform all involved (especially those planning urgent trips in the near future), that the biggest lesson gleaned from my visit is that they are already too late.

More than six years prior to President Obama’s historic announcement in December 2014 outlining the restoration of relations with Cuba, longtime Cuban leader Fidel Castro ceded authority to his younger brother Raul, citing health concerns. This leadership shuffle at the top of island’s power hierarchy heralded a new era in Cuban history. Reforms initiated by Raul – such as allowing the ownership of electronic devices, reducing restrictions on international travel, and legalizing up 178 different types of private enterprise – have imbued the island with a slight capitalist bent, and upended the idyllic tranquility romanticized by travelers wishing to experience of one of the last remaining vestiges of communism (but not actually ever live through it). The effects of these changes are present throughout the island – major cities have a decent selection of private restaurants, tourists and locals alike cram into public parks to enjoy Wi-Fi access that connects them to the outside world, and middle-class residents open up their homes for tourists to stay in (casas particulares). 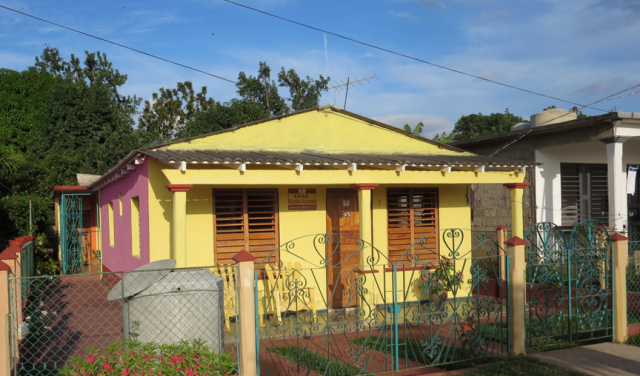 That’s not to say that communist-inspired economic policies and signs of government intervention in all aspects of society are non-existent – far from it. Cuba is the place to go if you want to purchase heavily subsidized ice-cream (four cents per scoop), spend hours each day waiting in lines for anything and everything, exchange ubiquitous advertising for billboards championing the revolution, and inhale the passing burst of unregulated fumes from beautifully restored 1957 Chevy Bel Air. The impact is felt by all who live within the system – tobacco farmers noted how they have to sell 90% of their crop to the government, a casa particular owner explained how she gave up her $50 a month government salary as a doctor to make nearly as much each night renting out a room to tourists, while a young professional in Havana pined over traveling to Haiti (downtrodden Haiti of all places!) to purchase the latest goods.

In this sense, elements of Cuba as a living museum for outsiders to marvel at are still readily apparent, but they have been altered significantly in recent years. Economic controls have been loosened and capitalism is beginning to take shape – now (approved) private enterprises jostle with government-run entities, rather than being illegal and/or frowned upon. Nonetheless, it is easy to forget that despite the changes and the Obama administration’s recent overtures, the Communist Party of Cuba remains the ultimate arbiter of power on the island. The pattern of change established has been steady thus far, as the system transforms from one of the last havens of communism on this planet, to one that is just a little bit more measured in outlook. From this perspective, rather than viewing the eventual lifting of the US trade embargo as a culmination point in this process of change, it is just another step (albeit a highly significant one that likely goes beyond mere symbolism) in a longer-term process.

Many Cubans feel the same – one (perhaps jaded) tour guide operator remarked on the improving relations and eventual dissolution of the embargo, that “there will be a few more tours and businessmen, but nothing will really change.” Implicit in his comment was the lack of impact on the daily lives of ordinary Cubans. A casa owner in the east of the country was more sanguine, noting that proximity to the US would ensure reduced prices for goods currently imported from further flung locations, but stopped short of predicting that his future battery purchases would be at Costco, and twelve dozen at a time. The common underlying sentiment being that while enhanced US relations will be a boon for the island as a whole, those pulling the levers within Cuba will ultimately determine just how far and at what rate the effects will play out, especially for the masses.

Broke down cars and bread lines – I don’t think this scene is going anywhere!

In this sense, the coming storm will likely be more a steady trickle of small adaptations that build upon one another, rather than an avalanche of instant Americanism, avoiding the overnight mini-Miami transformation feared by many current and prospective visitors. That in and of itself is probably the most encouraging news for travelers who desperately want to visit the island before it “changes,” but may not be able to in the near future. At the same time, Cuba undoubtedly has already changed, rendering harried plans to see communism in one of its purer forms less relevant. But given that the trajectory will be filled with numerous other fascinating twists and turns, there is still plenty of occasion to visit.

The Cuba of ten years ago resembles the Cuba of today less with each passing minute, but the same will be true of ten years from now as well. So fear not – you may be already too late in one sense, but that’s okay because it’s going to take a while!