If there is one institution that serves as a microcosm for all that is Cuba, it is none other than the Coppelia, or state-run ice cream parlors. If reading the words “state-run” and “ice cream” back-to-back in the same sentence seems odd, well that’s because it is. Of all things for a government to be involved in, I would’ve suspected ice cream production to be one of the last, but then I would’ve speculated very, very wrongly.

One of Fidel Castro’s pet projects apparently revolved around the idea of “ice cream for the people,” thus giving birth to the Cuban government’s equivalent of a Baskin Robbins (albeit initially with 26 flavors, presumably a reference to an important revolutionary event that occurred on July 26th). At any rate, the heavily subsided frozen dairy products fall in line with other forms of incredibly cheap entertainment – such as baseball games, the theater, and an overwhelming promotion of the arts. Keeping the costs of such diversions affordable and thus available to everyone, is likely both a key equalizing benefit of living in a socialist system, and a strategy for the long-term preservation of power. In short, it is an indelible part of what makes Cuba, Cuba.

What is ice cream indeed? 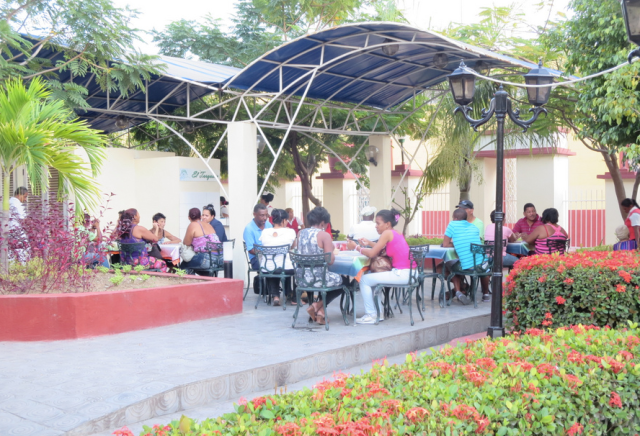 Government intervention is obvious from the moment you set foot in one of these institutions. For starters, the price of ice cream is astronomically cheap, beyond reasonable human comprehension (I do think some owls could pick this up though). The first time I ordered two scoops, and when I asked for my bill the surly waitress simply grunted “dos pesos.” Assuming there was no way she could be talking in moneda as that would amount to 8¢, I assumed she meant two CUC, the equivalent of $2 (it never got any less confusing that the two currencies in Cuba were often referred to simply as ‘pesos). A dollar per scoop seemed a bit much, but made much more sense than four cents per scoop. So I handed her the exact amount, rather than a larger bill which would have resulted in a 35-minute wait for my change (did I mention this was a state-run place?), and promptly left. It was not until days later at another coppelia that I realized the prices were indeed that cheap, and I had given a personal all-time record 2,400% tip!

The recipients of a record-breaking, but very confusing tip

Other indicators typical of state-run places were also readily apparent – for example, I noticed an odd phenomenon where everyone else always had piles upon piles of ice cream at their tables, making my two scoops look rather meager in comparison. A standard order seemed to be more within the five (ensalada) to seven (gran piedra) scoop range, with most customers insisting on two orders each – up to 14 scoops of ice cream per person! Looking at the menu, I realized the largest single order possible was a seven scoop wonder, and assumed the fact that everyone was doubling down was due to some top-down imposed limit to which I was unaware. Regardless, the obscene amounts of personal ice cream consumption fit in nicely with the live-in-the-moment approach to personal consumption on the island, to “get as much as you can, while you can.”

Remember that its not in CUC, so seven scoops for less than 30 cents!

At the same time, the first coppelia I wandered into was a massive structure, with space for about fifty tables. Of course, only maybe four or five occupied at the time, making the room look eerily empty. The low patronage was not reflected in employee hiring practices, as I counted at least seven people in the back via the see-through glass doors, in addition to four officially uniformed wait staff. That meant each table could have had its own personnel waitress, along with two kitchen members attentive to their order. Given that there was nothing that complex on offer, with the majority of orders consisting of scooping ice cream into a bowl and perhaps delicately adding a wafer, the amount of personnel seemed just so slightly excessive (and likely was given that at least two or three employers stood there the entire time during my visit, literally not doing anything). Except it really wasn’t, because despite the proliferation of waitresses, I still have to work to get anyone’s attention. It took over twenty minutes after sitting down until someone took my order, while two of the waitresses spent that entire time chatting to another lady who can entered the coppelia to sell pastries to accompany your ice cream. 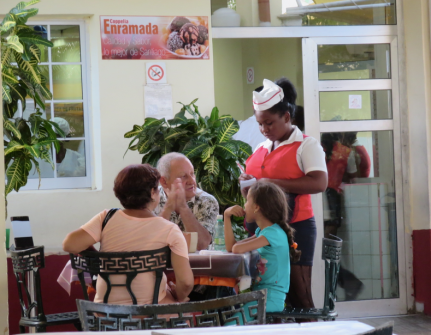 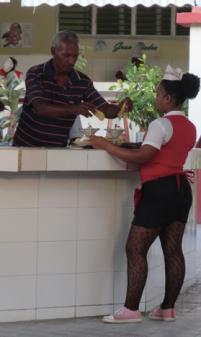 In contrast, hard at work at this coppelia

In addition, the choice of flavors had long been whittled down from 26, evidence of local shortages. No coppelia that I visited offered more than four, with many having only two on hand after selling out the rest. And while the first coppelia I patronized in Cienfuegos was rather empty, the lines around the block on a Saturday evening at the one Santa Clara revealed that perhaps they do fill up at times, and thus engender the continued persistence of Cuba’s line culture. Furthermore, despite this insatiable demand for ice cream, just about every (not-so) convenience store I went into had a large, and utterly empty Nestle ice cream freezer, which looked like it had not been operational for some time.

The status of (private) ice cream in Cuba

In short, the coppelias symbolize everything that is great and irksome (from my engrained capitalist perspective) of Cuba. The coppelias themselves promote the local dairy industry and provide (excessive) employment, while the cheap price allows (over) indulgence by the masses. Conversely, the coppelias are not insulated from aspects of Cuban life that largely derive from a state-controlled economy such as long lines, limited selection, inefficient service, and externally imposed purchasing limits. At the end of the day, however, if you can acquire 14 scoops of ice cream for less than 56¢, perhaps that is a win for all involved! 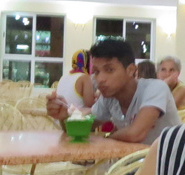 Even this guy is semi-impressed!